The global electric bicycle (e-bike) market has grown substantially in the last decade. E-bikes represent the largest, most rapid uptake of alternative fuelled vehicles in the history of motorisation. E-bike owners ride more often, and farther than other cyclists and are able to better maintain speed with less effort. E-bike ownership reduces car use to an even greater extent than regular bicycles.

This report, produced for the City of Melbourne, was focused on understanding current trends in e-bikes, impacts on travel behaviour and what governments can do to increase the uptake of this space and energy efficient form of transport.

Australia’s harmonisation of e-bike regulation, which broadly equates to European standards, coupled with growing market interest, has resulted in a flourishing local e-bike sector. This report examines international research on e-bikes; who uses them, for what purpose and the impact they can have on transport outcomes. This provides the basis for an exploration of the potential of e-bikes to assist Melbourne in meeting its transport and wider strategic objectives. E-bikes for personal travel, as well as commercial applications, such as last kilometre freight and food delivery are explored in this report. 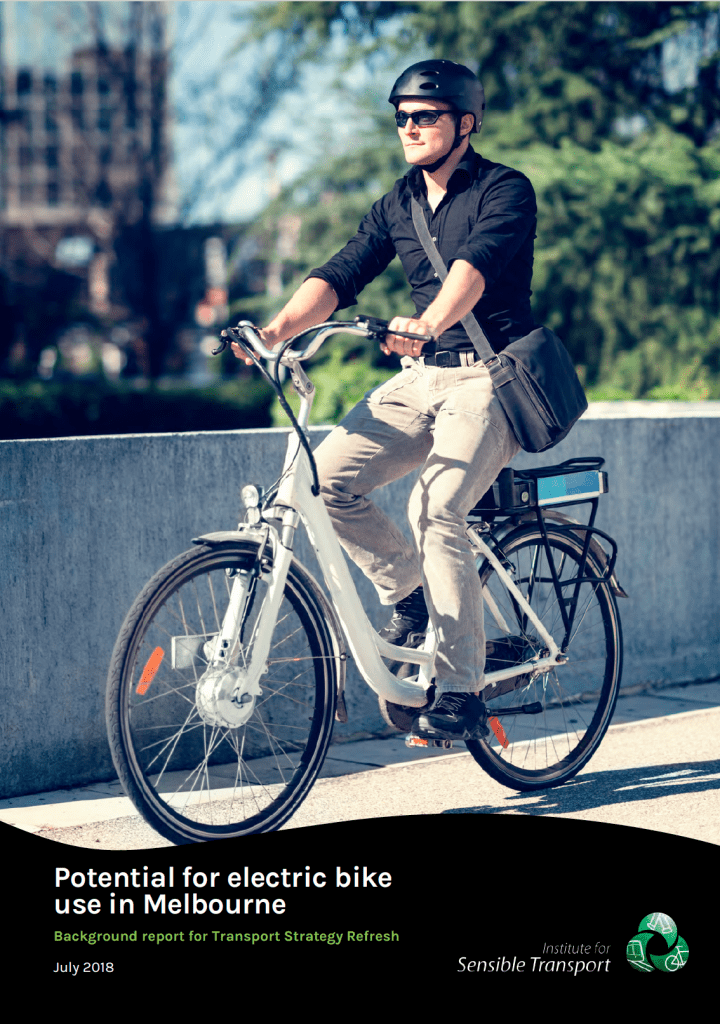 E-bikes offer the user quicker travel time, with less effort. E-bikes have been found to lessen some of the common barriers to conventional bikes, including the ability to overcome topographical challenges, physical limitations of the rider and arriving at work without perspiring. Moreover, e-bike owners report that being able to ride with greater loads (e.g. children or groceries) opens up greater possibilities for cycling, including replacing some car use.

While the increasing availability and presence of e-bikes should be welcomed, there are some potential issues that will need to be addressed. This includes possible speed differences between e-bike riders and those on conventional bikes. This may represent overtaking issues on narrow parts of the network. Additionally, the burgeoning food delivery market may have (anecdotally) a higher prevalence of throttle-controlled e-bikes (which do not require pedalling and can, illegally, provide propulsion greater than 25km/h). Their concentration in some parts of central Melbourne may cause some pedestrian access issues.

Research suggests that the main barriers to a greater take up of e-bikes relate to a higher purchase price, theft concerns if having to park on the footpath, battery range and the safety associated with riding on streets without adequate bicycle infrastructure. Recent City of Melbourne commissioned research found a very strong market preference for bike lanes that offered physical protection from motor vehicles.

E-bikes offer several important benefits to assist the City of Melbourne achieve its wider objectives. Many of these relate to the added value proposition e-bikes offer. Female representation in cycling participation is much lower than their 51% of the population and e-bikes have been found to reduce this gender imbalance. At peak times, the road and public transport network is at capacity, and therefore e-bikes provide an opportunity to lower capacity constraints currently impacting the road and public transport network. As Melbourne continues to grow, this congestion is widely expected to become more pronounced. The ability of e-bikes to shift trips from motor vehicle and public transport hold the following specific benefits in addition to congestion reduction:

Understanding the potential for e-bikes

A brief analysis was undertaken to assess the potential for e-bikes to contribute to growing the number of people accessing the City of Melbourne by bike. Focusing solely on the journey to work, e-bikes have the potential to substantially increase the number of people accessing City of Melbourne workplaces by bike. A high-level analysis suggests e-bikes are capable of increasing daily ridership by between 2,000 and 6,000 people, for the journey to work alone. This is the equivalent to adding between 2 to 6 new High Capacity Metro Trains servicing the peak each day.

E-bikes also hold great potential to reduce negative impacts associated with last kilometre freight delivery. The density of small parcel freight delivery in central Melbourne lends itself to e-cargo cycles. These vehicles are currently experiencing a surge of activity in European cities. E-cargo cycles offer an important opportunity to reduce the congestion and emissions caused by small parcel delivery in the City of Melbourne and assist in efforts to create car free, vibrant spaces within central Melbourne.